Profs. Raffi Stern and Martin Goldway from Tel-Hai College, are joining colleagues from the MIGAL-Galilee Research Institute and the Northern Agricultural R&D to achieve groundbreaking results in agriculture. Their multidisciplinary research is deciphering biological secrets that are significantly helping Israeli fruit farmers to grow larger yields.
One example of their joint work began by seeking the reasons for the low fertility of Starking (Red Delicious) apples. In comparison with fruits grown in other regions of the world, Israel fruit yields are often lower and smaller despite excellent farming standards. Through their innovative research, Goldway and Stern found and identified the genetic incompatibility mechanism between different apple varieties that prevents the crop from achieving full potential. Their research is particular vital to growers in the Galilee, the main fruit-producing region in Israel.
Most fruits grown in the region - apple, pear, apricot, plum, cherry, peach, loquat and almond – are from the botanical family Rosaceae. Although the flowers of these fruit trees have both male and female components, they are self-incompatible - the flower does not fertilize itself. Fertilization is achieved by cross-pollination with another variety. Because of the dependence on cross-pollination, orchards contain at least two varieties that flower at the same time and are genetically compatible. The gene responsible for this aspect of the plant is exceptional in that it comprises hundreds of genetic forms (alleles), tens of them per species. Thus, most varieties differ in their genetic forms; this variation enables specific molecular characterization and varieties can be analyzed for compatibility, semi-compatibility and incompatibility

To determine if the level of compatibility affects yield, researchers from Tel Hai and MIGAL analyzed all the apple, pear, plum, apricot and loquat varieties grown in Israel. They learned that semi-compatibility is a significant reason behind reduced yield. For example: the apple variety Starking planted adjacent to the semi-compatible variety Jonathan produced 30% lower yield than when planted adjacent to the fully compatible variety Golden Delicious. Similarly, the main pear variety grown in Israel, has lower yields than in Italy, and was found to be only semicompatible with the three varieties that serve as its pollen donors. In fully compatible varieties, all pollen is accepted. Full compatibility is likely to lead to higher fruit set and yield in the Mediterranean climate; fruits tend to be larger and high-quality and therefore garner higher prices.

In Israel, new orchards are now designed to take into consideration genetic compatibility and all newly bred varieties are routinely genotyped. In fact, this has become a generally accepted practice worldwide. Tel-Hai researchers have teamed up with researchers in most of the leading pear growing countries to record molecular characterization of most of the world’s pear varieties and the data is available for the benefit of the benefit of pear growers around the world. Additional research by Stern and Goldway on the subject of increasing low fruit yields dealt with the role of honeybees in cross-pollination. Fascinating multi-year research on the behavior of honey bees on different species of flowers showed that it is possible to significantly increase the levels of cross pollination by introducing hives differently than previous methods.

Moreover, in follow-up studies, it was found that by adding bumblebees, in addition to honey bees, not only was there no antagonism between the species, synergy was created between the two, resulting in a significant improvement in cross-pollination leading to more and larger fruits. That is, bumblebees significantly improved the work and output of the honey bees. Crop growth is, of course, important but it is usually necessary to dilute in order to bring about better dispersion of the fruit on the tree so that the fruits grow to a large size, a critical commercial parameter. Only fruits of a certain size will reach the market, while small fruits will be marketed to the industry. Industrial prices are far lower than the fresh fruit market. Tel-Hai researchers have teamed up with researchers in most of the leading pear growing countries to record molecular characterization of most of the world’s pear varieties and the data is available to the benefit of pear growers around the world.

Additional groundbreaking research addresses the topic of thinning crops. In contrast to the previous examples, in which the problem is a lack of fruit, farmers around the world also deal with the reverse phenomenon of too much fruit on the trees. Farmers are doubly harmed: in an abundant crop year, the fruits are too small, and sometimes not fit for market; the following year, the tree does not produce enough flowers and the yield is too low. In order to moderate the large discrepancies between the years, farmers must thin and remove some fruit during the high-yield year. Thinning fruit crops is complicated and presents a great challenge for fruit researchers around the world. In recent years, Professor Stern, in cooperation with the Adama Agan Company, is developing a new product for thinning apples. The product works on the principle of temporarily diminishing the photosynthesis process, which brings a temporary reduction in the production of sugars in the plant, exactly at the critical stage of the beginning of fruit growth. As a result of this temporary limitation on sugars, the smallest and weakest fruits fall off, and only the strong, promising fruits are left. This saves valuable time thinning fruits by hand, and enables farmers to grow only large fruits in that year, with excellent flowering the following spring. Professor Stern has also succeeded in developing a number of unique methods for thinning pitted fruits such as peaches, plums, apricots and cherries. 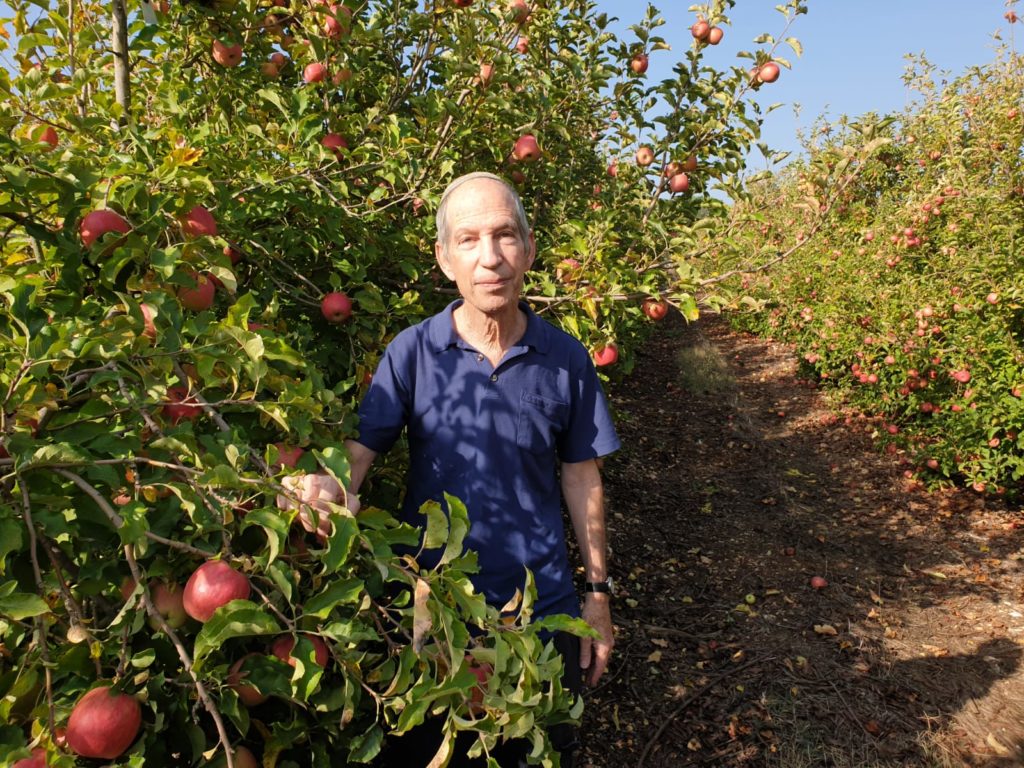 The innovation in these methods was discovered through studying the mechanism by which the trees produce fruit. The idea behind the methods is that by hindering the pollination process from the outset, the possibility of creating too many fruit is avoided, and thus there is no need for expensive hand-thinning at a later stage. These in-depth studies, carried out with research assistance from master and doctoral students at Tel-Hai College and MIGAL-Galilee Research Institute, are assisting farmers in Israel and around the world to increase their crop yields and to meet global food needs of the 21st century.

We use cookies on our website to give you the most relevant experience by remembering your preferences and repeat visits. By clicking “Accept All”, you consent to the use of ALL the cookies. However, you may visit "Cookie Settings" to provide a controlled consent.
Cookie SettingsAccept All
Manage consent

This website uses cookies to improve your experience while you navigate through the website. Out of these, the cookies that are categorized as necessary are stored on your browser as they are essential for the working of basic functionalities of the website. We also use third-party cookies that help us analyze and understand how you use this website. These cookies will be stored in your browser only with your consent. You also have the option to opt-out of these cookies. But opting out of some of these cookies may affect your browsing experience.
Necessary Always Enabled
Necessary cookies are absolutely essential for the website to function properly. These cookies ensure basic functionalities and security features of the website, anonymously.
Functional
Functional cookies help to perform certain functionalities like sharing the content of the website on social media platforms, collect feedbacks, and other third-party features.
Performance
Performance cookies are used to understand and analyze the key performance indexes of the website which helps in delivering a better user experience for the visitors.
Analytics
Analytical cookies are used to understand how visitors interact with the website. These cookies help provide information on metrics the number of visitors, bounce rate, traffic source, etc.
Advertisement
Advertisement cookies are used to provide visitors with relevant ads and marketing campaigns. These cookies track visitors across websites and collect information to provide customized ads.
Others
Other uncategorized cookies are those that are being analyzed and have not been classified into a category as yet.
SAVE & ACCEPT